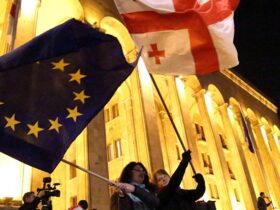 On 20 October, the situation on the frontline was relatively stable and tense during the night according to the Armenian sources. Shushan Stepanyan, a spokesperson for Armenia’s Defence Ministry stated Azerbaijani forces used aviation and artillery in the northern frontline. She added that intensive fierce battles in the southern sector continued. Stepanyan also wrote that the Azerbaijani troops retreated to the south, towards the Khudaferin water reservoir, suffering heavy losses. “We have warned that you are going to hell,” she wrote on her Facebook page. This information was afterwards refuted by the Assistant to Azerbaijan’s President Hikmet Hajiyev.

Azerbaijan’s Ministry of Defence has stated that battles continued overnight in the north and south of Nagorno-Karabakh. The Ministry also reported shelling in the territories of Terter, Aghdam and Goranboy regions, which resulted in the deaths of  two civilians.

Armenia’s President Armen Sarkissian stated that he sees no need for Russia’s military interference in the Karabakh conflict. In his interview with France 24, he said first of all, the Armenians of Nagorno-Karabakh have already proved that they can defend the territory. In his opinion, instead of involving Russia or any other country, it would be better to speak about excluding Turkey, which “has a completely destructive role” in the conflict and “has added a new dimension to this which doesn’t have anything to do with Nagorno-Karabakh.”

Armenia’s Deputy Foreign Minister Shavarsh Kocharyan said that Armenia has not yet applied for CSTO assistance in the conflict. He emphasised that  in order to ask the CSTO for support, armed forces must be used against Armenia’s sovereignty, territorial integrity or political independence. He added that it is too early to assess the cases of shelling settlements and infrastructure in Armenia as aggression towards Armenia.

The UN Security Council called on Armenia and Azerbaijan to respect the ceasefire agreement from 17 October. During the meeting, the Security Council’s 15 Member States reportedly reiterated the plea of UN Secretary General Antonio Guterres for the sides to respect the ceasefire. A statement is expected to be agreed between Council’s members this week which would call on Armenia and Azerbaijan to resume negotiations under the auspices of the OSCE Minsk Group.

Russia’s UN Representative, Vasily Nebenzya, said that the Security Council also discussed what body could monitor the observance of the ceasefire and how. “The UN would require a mandate from the Security Council, this is not an easy or quick thing. The OSCE plays a major role in the settlement […] Who will be there and in what capacity, who will be in control — this is still a question. It is being discussed. How it will be implemented in practice is another matter,” he said.

It was also announced that on 23 October the Armenian and Azerbaijani Foreign Ministers, Zohrab Mnatsakanyan and Jehyun Bayramov, were scheduled to meet separately with US Secretary of State Mike Pompeo in Washington. “It is not clear whether the envoys will meet with each other or whether US officials will try to convene a trilateral session. But their same-day visits signal that the US is deepening its efforts to tamp down the resurgent conflict, which has reportedly killed hundreds of combatants and civilians since late September,” wrote Politico.