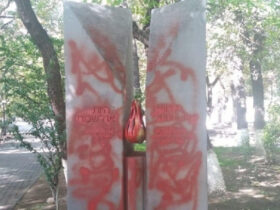 The Azerbaijani president has vowed to guarantee universal rights of all ethnicities on its soil as it always has been.

Speaking to Japanese Nikkei newspaper, Azerbaijani President Ilham Aliyev provided insight into the ongoing war in Karabakh, in which the nation’s army is retaking own villages, settlements and towns one after another.

“During this active phase of the conflict, I have repeatedly made statements that the Armenians living in Nagorno-Karabakh are our citizens. Their security and rights will be fully ensured, as well as the rights of other people in Azerbaijan,” President Ilham Aliyev said this in an interview with Japanese newspaper Nikkei.

As a proof of his statement, the Azerbaijani president reminded that tens of thousands of ethnic Armenians live across the country and are fully-fledged members of society.

Today, thousands of Armenians live in Baku and other places of Azerbaijan. As for the issue that a large number of Armenians live in Karabakh, according to the information we have, the real population of the occupied territories, including the Nagorno-Karabakh Autonomous Region, is approximately 65,000 people. This is not a large community. However, before the war, in the early 1990s, over 40,000 Azerbaijanis lived in Nagorno-Karabakh and in particular in Susa, Xankandi, Xocali (Khojaly), where the Armenians committed genocide, and other cities, the president said, adding that the Armenians carried out ethnic cleansing.

“Unlike Armenia, where there are currently no Azerbaijanis, today thousands of ethnic Armenians live in Azerbaijan. And 99 percent of the population of Armenia are ethnic Armenians. Thus, representatives of national minorities will not be able to live and survive there. They drove away all the people who lived in the territory of today’s Armenia. Azerbaijanis were the largest community in Armenia. At the beginning of the 20th century, 70 percent of the population of the city of Irevan (Yerevan) were Azerbaijanis. The Armenians have destroyed all our historical and religious monuments,” the president said.

The Azerbaijani president also denounced Armenia for improper behavior and violating the rules of war and the conduct of war. Azerbaijan does not carry out ballistic missile attacks on the territory of Nagorno-Karabakh and Armenia.
“I said that we will take revenge, but our revenge will take place on the battlefield. Thus, the Armenians in Nagorno-Karabakh can be fully confident that their security, as citizens of Azerbaijan, will be ensured. After the criminal junta is removed from power in Nagorno-Karabakh, they will live better. They will live with dignity in peace, and we will provide them with all the social and economic benefits that other citizens in our country have,” the president said.

President Ilham Aliyev believes that prior to resuming talks with Armenia, Pashinyan must declare his readiness to liberate all territories, then negotiations are possible.

“Serious commitments must be made to liberate the occupied territories. Because this is part of the basic principles agreed between the two countries through the mediation of the Minsk Group,” Ilham Aliyev said, answering the question whether Azerbaijan will require Armenia to liberate at least some of the seven districts before negotiations can take place.

The basic principles state that the occupied territories must be returned to Azerbaijan, our refugees and internally displaced persons must return to all the occupied territories, including to the territory of Nagorno-Karabakh and the ancient Azerbaijani city of Susa. Therefore, the Armenian government must openly declare its adherence to these principles, liberate these territories, and then, of course, negotiations will begin. We are not putting forward a precondition – first the liberation of the territories, and then the start of negotiations, the president opined.

Now we demand from Armenia, the Azerbaijani president said, from the man personally responsible for the violence and war crimes committed against the civilian population, the Armenian prime minister to declare that Armenia is liberating the occupied territories of Azerbaijan.

“After that, of course, the settlement of the conflict will move from the battlefield to the negotiating table,” the Azerbaijani president said, reiterating that all regions of Azerbaijan must be liberated and all Azerbaijanis must return to their ancient lands.

Meeting with Pashinyan depends on the agenda – Aliyev

“Of course, such a meeting in Moscow is possible, they have been before. But everything depends on the agenda of the meeting, ”Azerbaijani President Ilham Aliyev told the Japanese newspaper Nikkei, answering the question whether a trilateral meeting in Moscow with Armenian Prime Minister Nikol Pashinyan in presence could take place.

Unfortunately, the Armenian government is far from the prospect of a peaceful settlement of the conflict. Because the very ineffective and provocative statements and actions taken by the Armenian leadership actually made the negotiations meaningless. Because the main topic at the negotiating table has always been the liberation of the occupied territories of Azerbaijan in accordance with the resolutions of the UN Security Council, the president added.

When the Armenian prime minister says “Karabakh is Armenia”, when he says Azerbaijan should negotiate with the so-called “government of Nagorno-Karabakh”, when he gives the order to strike Ganja (Ganca) with ballistic missiles, when every day other cities of Azerbaijan come under attack, there is no room for negotiations. Therefore, we had to prove to the Armenian leadership that they would no longer be able to take these aggressive steps with impunity, the president added.

We are punishing them on the field, we are liberating our territories, almost every day I declare new cities and villages liberated from the Armenian occupation. Armenia is suffering a very heavy defeat on the battlefield.

Therefore, of course, they should act more logically and understand that the territories will be liberated from occupation. We wanted to achieve this through peaceful negotiations. However, this turned out to be impossible due to Armenia’s unconstructive position and provocative steps. Therefore, now we are liberating our territories on the battlefield, President Ilham Aliyev said.