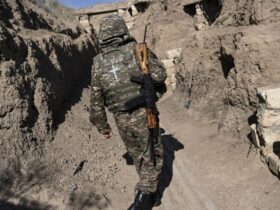 Azerbaijan has inflicted devastating blows on the Armenian armed forces and its military arsenal since the September 27 when the ongoing campaign for the liberation of the occupied lands has got underway.

On October 14, Azerbaijani President Ilham Aliyev announced the liberation of another eight villages from the Armenian occupation.

Another good news of October 14 so far is that just before midnight Azerbaijani kamikaze drones destroyed Armenia’s ballistic missile systems near Kalbacar District under Armenian control.

An Azerbaijani kamikaze drone destroyed at least one Iskander operational-tactical missile system of the Armenian army today. According to the Azerbaijani media, at least three operational-tactical missile systems on the scene were destroyed and judging by the photograph taken from the drone, there were a Tochka-U and two Iskander missile complexes there.

Azerbaijan said the missiles were being readied for striking targets and were hit as legitimate military targets to prevent an attack similar to the October 11 fatal missile strike on the nation’s second largest city of Ganca.

Judging by the photo taken from the drone, the talk is really about the deployment of the Iskander missile system and due to the design feature of the mobile launcher, the system was destroyed at the very first attempt to use it against civilian targets in Azerbaijan.

In the meantime, the October 10 Moscow-brokered humanitarian cease-fire crumbled without producing any effect with the parties trading accusations.
Speaking to media in Moscow on October 12, Armenian Foreign Minister Zohrab Mnatsakanyan, like the Armenian prime minister, failed to realize the gravity of the existing situation for his tiny nation, trying to mislead the media with his bluffs about separatist Karabakh’s involvement in the process.
Armenian Foreign Minister Zohrab Mnatsakanyan stressed that Yerevan cannot decide anything on the Karabakh issue without Stepanakert’s consent.

He added that Stepanakert cannot but participate in the negotiations, since the issue concerns Nagorno-Karabakh itself. Both the OSCE Minsk Group co-chairs and the parties to the conflict understand this, he claimed, without realizing the de facto situation on the Karabakh theatre of war.

“The fact that Karabakh does not sit at the negotiations table does not mean that we, for our part, do not work with its representatives. However, if someone assumes that we call to Karabakh and give commands, he/she absolutely does not imagine the realities of Armenia, Nagorno-Karabakh, our life and our relations. We cannot give commands to Nagorno-Karabakh, but we can work with it. It is impossible to imagine a situation when we in Yerevan can decide something, agree on something and put it on table without the consent of Nagorno-Karabakh,” the Armenian foreign minister claimed.

He went further, adding that “within the framework of its propaganda, official Baku pays a lot of attention to this issue and reacts sharply to attempts to return Stepanakert to the negotiations table, since it wants to demonstrate that this is an `Armenian-Azerbaijani conflict’ where Karabakh allegedly does not exist at all. However, according to Mnatskanyan, `the realities are different’”.

The minister bragged again and wanted to pull the wool over eyes. On October 9, the Azerbaijani and Armenian foreign ministers had consultations in Moscow with the mediation of Russian Foreign Minister Sergei Lavrov, where the parties agreed on the following steps: 1) a ceasefire is announced from 1200 on October 10, 2020 for humanitarian purposes for the exchange of prisoners of war and other detained persons and bodies of the war dead through the mediation and in accordance with the criteria of the international red cross; 2) the specific parameters of the ceasefire regime will be agreed upon additionally.

In addition, Azerbaijan and Armenia, with the mediation of the OSCE Minsk Group co-chairs, on the basis of the basic principles of the settlement, are to start substantive negotiations with the aim of achieving a peaceful settlement as soon as possible. The parties confirm the invariability of the format of the negotiations process, the statement reads.

Under crushing strikes of the Azerbaijani armed forces, Armenia is gradually admitting it sustained huge losses. However, Armenia avoids acknowledging that it turned the region into a hotbed of terrorism and does not want to refuse it.

Despite flagrant violations of international humanitarian law and powerful strikes of the Azerbaijani army, Armenia is firing everything in its arsenal on civilian targets inside Azerbaijan and resorts to various tricks and falsifications to disguise and justify its war crimes. The military-political leadership of Armenia is conducting a total disinformation campaign, accusing not only own people but also hiding tremendous losses.